Tired of the lip-service-little-action performance of some corporate big wigs, I believe that what they traditionally feed us, Americans, is the Inclusion Theater, a cheap replacement of true equality. Is it going to change?

Let us look at the facts and figures. Race and gender have long been the entrenched problems for the US technology giants, as media, employees, and people at large are very aware of. Numerous groups of “women in tech” have been mushrooming to no tangible avail: the numbers of women in the boardrooms, upper management positions, and corner offices moves up at glacial pace.

The dismal diversity numbers display the true colors of some high-tech firms: condescension to women colleagues and aversion to many people of color. Hence, we see the monochrome picture today. 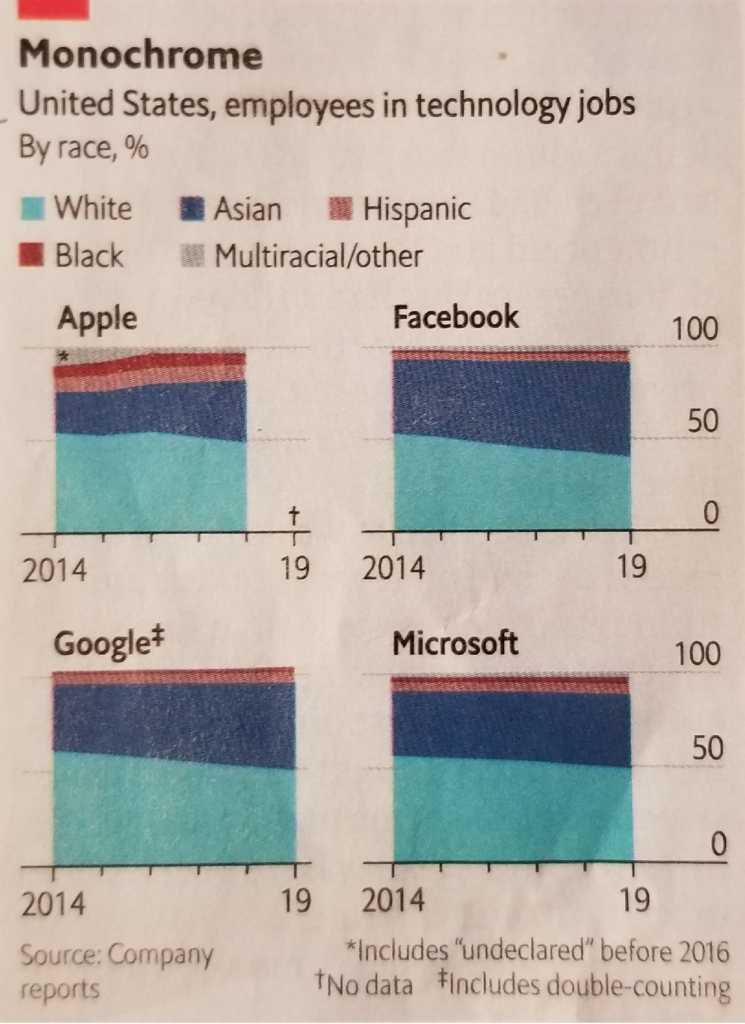 Pandemic danger sensitivities intensified with the state-mandated lockdowns and general fatigue from social distancing and economic restrictions – which erupted in anti-racist protests of those seeking social change through peaceful means. The connection between pandemic and protests brings about a change in attitudes towards diversity.

Racial diversity – especially African Americans’ presence – is stuck, along with gender. But attitudes are changing, although, according to The Economist, many Silicon Valley firms started to face up to its diversity problem only after the push from the left-leaning employees who reacted to Black Lives Matter. But better late than never. The management of many companies finally moved forward when they:

Of course, we need to take it with a grain of salt. The question remains, will the companies really change the ways they operate, beyond charity and lofty language? Will they make more substantial efforts to promote minority employees? Anyway, change is brewing in the Silicon Valley and beyond—and a good-change beginning is half the battle.

I have long argued for “Americans for Tolerance” movement in my interviews, book, and blogs. Customers, employees, and American people at large want to see a true inclusion, not just watch an inclusion theater, a poor substitute for transparency and tolerance as integral parts of American democracy. We can see this desire transpire in the recent disgust that many companies exhibited for Facebook, effectively counteracting its double-faced inclusion theater when the upper management speaks pro-inclusion but allows proliferation of hate to flood its platform. The last straw was Facebook allowing incitement of violence against anti-racial protesters in the wake of George Floyd and others.

The coalition of civil right groups led by Anti-Defamation League responded to “repeated failure” by Facebook upper management to respond to and meaningfully address the vast proliferation of hate on the platform. The group’s campaign dubbed “Stop Hate for Profit” now includes Coca-Cola, Verizon, Honda, Ben & Jerry’s, Levi’s, Unilever, Eddie Bauer, North Face, Starbucks, and even Harry and Meghan who strive to lead by example. What do they do? They boycott Facebook by withdrawing the flow of money put in their ads. This resulted in Facebook’s market value plummeting $56 billion.

This boycott is most timely, because with the November election around the corner, we need to defend the voters’ rights for fact-checked information and no-threat speech. And because Mark Zuckerberg understands the language of money best (his personal net wealth plummeted by 7.2 billion), he immediately introduced a set of new policies to fight hate speech.

New companies join Stop Hate for Profit campaign every day. We will live and see if that amounts to a full-pledged diversity reset.

With diversity reset started on the right foot, the grand diversity statements and liberal mindsets need to be consistently supported by action, especially by the big technology firms – like Xerox, IBM, HP – that traditionally were at the forefront of Diversity and Inclusion—otherwise we will be watching the meaningless inclusion theater unfold forever.

Our society is hungry for good news on diversity and inclusion front – and for hearing about concrete examples of corporate positive thinking. In fact, media needs to pay special attention to things of that nature—instead of constantly criticizing corporations and shying away from positivity. We the people would love to see HOW diversity numbers and attitudes are changing organizations for the better. That would be both educational and inspirational, and at this turbulent day and time the American public deserves to know that the future of our diverse nation is promising.

Remember: together, we stand.