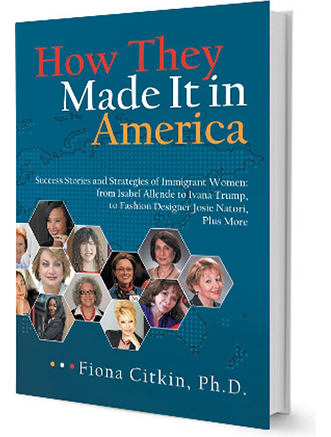 How They Made It in America: Success Stories and Strategies
of Immigrant Women, from Isabel Allende to Ivana Trump to Fashion Designer Josie Natori, Plus More

The book follows the success stories of prominent American achievers who made it big with the most odds stacked up against them: the immigrant women of the first generation. It explores this extreme case – what they did and how they did it. Fiona Citkin belongs together with her superwomen, which gives her the insights and the right to write about them. You will read about the hard-hitting cases of American achievement and the fundamental 7 success values—the enablers of success.
You, the reader, will not only enjoy the success stories but also will put the book subjects’ accumulated know-how to good use: the book shows how to apply their strategies, how-to tactics and direct tips—and how to use them as shortcuts any time you need.
The 18 success stories, 7 success strategies/values, case studies, and direct tips the book subjects will give you a huge advantage on the way to your own success in America. Welcome!

Buy in bookstores or Order Online

Americans historically associated success and achievement with risk-taking. The book subjects exemplify the seven success values as enablers on those who took risks with the extreme odds lined up against them: the first generation of immigrant women.

We explore what exactly they did and how they did it while looking into individual experiences and articulating the heroines’ accumulated wisdom summarized in their common success values, diverse case studies, and how-to tips. Every success seeker can benefit from this: if the toughest cases of American achievement worked out wonderfully, we need to know what enabled them, so we too could crack the all-American success code—and that’s the message.

The stories of 18 women including some celebrities (Isabel Allende and Ivana Trump among them) describe How They Made It in America. Learn from their success stories—and then internalize the success values that empower achievements, in this first book out of a series of two.

The book straddles narrative non-fiction and self-improvement/how-to. It has 80,000 words and 25 pictures.

Born and raised in Ukraine, Dr. Fiona Citkin holds two doctorates and speaks three languages. She came to America as a Fulbright Scholar studying languages and cultures at Kent State University, OH. She published two previous books on language/translation and cultural diversity (SHRM Publishing). Her Huffington Post and Thrive Global blogs explore the issues of multicultural women and their achievements: http://www.huffingtonpost.com/fiona-citkin-phd/. With experience as Director of Berlitz and a personal consulting portfolio, Fiona has skills in public speaking, marketing, magazine, podcast, and TV interviews, entrepreneurship, and certainly, intercultural communication and languages. She can be reached at Fiona.Citkin@expertms.com

Food for Thought Story: You Have to Take the Stairs!
I remember how my father was dying of cancer for three long months. He had been placed in the best hospital in town, the Central Hospital for Executives—not because he was a well-deserving veteran of WWII who fought fascism as a captain in the Chemical Division, but because my brother Simon was a famous doctor and a head of that hospital’s department, a small detail of life in Ukraine at the time.

Anyway, my father agonized with ever-increasing pain and the family took turns sitting near his bed 24/7. My shift was all day time, and I could make long hours since I was on the “creative leave” from the university, for finalizing my doctoral thesis.
It was hard. Father was aware of his diagnosis, but we never discussed or even mentioned it aloud. In the moments of relief, he would tell me his wartime stories, most of which I had known since childhood. He would also reminisce about his happy moments: daytrips to the woods, sleeping in a tent and cooking food over the fire; or treating the family to Black Sea vacations. A chemical engineer by training, he also recollected some innovations he introduced at his jobs. Indeed, inventing and changing things were his favorite occupations, passions that were passed down to my brother and I. We’re both kind of restless and seeking something new all the time.

My father would also share with me his wisdom of how to love well, how to care about the family and such, done casually and with no mention that he would soon be gone. Once he asked me what I would be doing that evening, and I said I would be sewing a new dress. Quick as an arrow, he asked, “What color” – and was visibly relieved to hear, “Red.” “Black” would signal a preparation for his funeral.

On the last day I saw him alive, father took my hand and said, pensively, “I’m so happy you’ll be a doctor, but it’s not the doctor I need: your doctorate is about suffixes-prefixes” (that’s how he referred to linguistics). I said, “Papa, my suffixes-prefixes are really complicated and I’m not even sure I can pull them out!” He looked me straight in the eyes and replied, “Never doubt it! You are my daughter. Just think of what I did in my time and how I did it. Remember, there’s no elevator to success, you have to take the stairs.”

Something turned in me, a lump in my throat…this was his good-bye, his blessing. And for many years now, I am doing just that: climbing the stairs, sometimes with my teeth clenched, trying to be worthy of my father. I did earn my second doctorate, became a full professor and chair—but then dropped it all and flew across the countries, restarting my life from scratch—for the promise of American freedoms. Would my father have done it? Would he approve it? Have I been good enough? In tough times, I always ask these questions, measuring my success against his values. It helps. It helped me build myself from the ground up.

The Point
You can do your own character-building. All you need is to recognize the traits you want to develop or acquire and select an appropriate role model. This self-coaching is a serious approach to character-building and to sustaining who/what you are and want to be. It’s building your success “from within.” You need to make constant efforts for your character-building though. Just like with bodybuilding, you cannot grow your muscles simply watching Arnold Schwarzenegger exercise! You need to persist and remember that almost nothing good happens overnight. There’s no elevator to success. You have to take the stairs.

Watch how Fiona Citkin introduces her new book and discusses it with two of her eighteen book subjects:

“How They Made It in America” Book Tour – let the author be your guide!

While covering the issues of prominent immigrant women for the Huffington Post, since April 2013, I came to recognize that these women’s stunning successes set a golden standard for all would-be achievers. Why? On their rise to big success in America, these eighteen women—who are the book subjects—have been learning the rules of the game in business and social practices while facing such hurdles as: 1) a glass ceiling; 2) lingering stigma against minorities and immigrants; 3) motherhood-household responsibilities that fall on women rather than men; and of course, 4) linguistic and cultural integration.

So, how did they make it in the most competitive country in the world? And how can we apply their unique survive-and-thrive know-how? I made it my business to spread the word and facilitate your learning. Read on how!
click here to read more